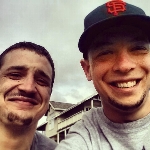 Becoming An Ironman For Mental Illness

As many of you know, I lost my little brother Dylan back in 2014, who spent more than a decade battling depression and OCD. Two years ago, my close friend Brian and I partnered with The Brian & Behavior Research Foundation ("BBRF") to raise an unexpected $17,000 while completing our first Ironman 70.3, in Saint George, Utah.

Most of the donations came from you. I turn to you again.

Too many of us have been impacted by mental illness, and while we still still stigmatize and don't fully understand most of these disorders, we are making progress. Over the pass year BBRF has funded depression research into new drugs, feed-back based therapy, brain circuiting and more. Famous star athletes, including Steve Young (NFL,) Kevin Love (NBA,) and Michael Phelps (Olympian) have publicly discussed their struggles.

My brother's memory continues to motivate me to make a difference. On June 2nd I'll be competing for another Ironman 70.3 in Hawaii (1.2 mile swim, 56 mile bike ride and 13.1 mile run.) To honor Dylan and to make a difference for those who fight a battle I can't fathom, I am working with BBRF again to raise money towards funding "out of the box" innovative research.

I have a goal of $5,000 over the next two months until race day. 100% of contributions are invested in research grants to neuroscientists.