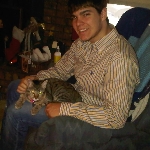 On March 16, 2018, our son, Brian Bengston, passed away at the age of 27. His death occurred after a nearly eight year struggle with mental illness. Although Brian was a high school honors student and made the Deans List in his first year of college, the onset of mental illness derailed his college experience at age 20 during his second year. The severity of his problem became fully evident in 2010 when we received a call from a classmate that Brian was in the hospital after an attempt to take his own life.

Brian came home from college and although he began seeing a Psychiatrist and a therapist, he made additional attempts on his life over the next two years. He was diagnosed with Bipolar II and Borderline personality traits. Brian's condition presented unique challenges for him and for us. Our lives were at times chaotic, as we dealt with anger outbursts, impulsive behavior, and urges to self-medicate. As parents, we often felt like we were facing the situation alone, as few could ever understand what we were experiencing.

Brian gradually made some progress, as there were no more suicide attempts after 2012 and incidents involving uncontrolled anger became less severe. However, he was never able to go back to college or hold down a job. Everyday life remained a struggle for him and he was often very depressed. Even so, the soft side we always saw in him as a small boy remained evident, for example, in his love for animals.

Although Brian did not die directly from mental illness or suicide, he suffered for several years. Moreover, the emotional pain he experienced on a daily basis often masked the pain of physical illnesses. He would not seek medical treatment until the physical pain reached a level far above most people's tolerances. This likely contributed to his death.

Seeing firsthand the impact of mental illness on Brian's life, we understand how devastating it can be both to the person suffering and for parents and loved ones desperately trying to look out for their child's well being. We wholeheartedly support and encourage your generous donation to the Brain & Behavior Research Foundation (BBRF)!