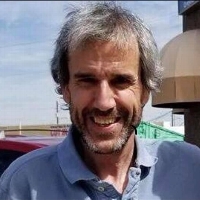 In Memory of Terry A. Davis

A personal campaign sponsored by Family and Friends of Terry

Terrence Andrew Davis, known as Terry or Terry A, had a great sense of humor, loved music, and had a wonderfully sheepish smile!  In addition, he combined his dedication to God with his brilliance as a computer programmer to write an operating system from scratch: TempleOS.

Terry also suffered from schizoaffective disorder, which had a devastating impact on his life and those who loved him.  If you would like to learn more about Terry's story, please listen to the Aleks Krotoski's BBC podcast, "The Digital Human - Series 18: Devotion."  You can also read more about Terry on Wikipedia or in Jesse Hick's article, "God's Lonely Programmer."

Please join Terry's family in working to ease the pain and suffering caused by mental illness by donating to The Brain & Behavior Research Foundation:

100% of every dollar donated for research is invested in our research grants. Our operating expenses are covered by separate foundation grants.